An unusual cause (and cure) for physician burnout 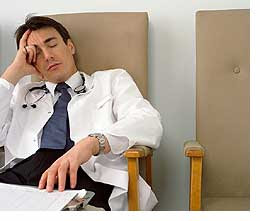 As a psychiatrist, I've worked in many general hospitals and inpatient psychiatric units -- including specialized ones for forensically mentally ill people.

Patients arrive on such units in all kinds of distress: severe depression, psychosis, suicide attempts, domestic violence, drug and alcohol abuse, and sometimes criminal offenses. Many also have additional problems like diabetes, hypertension, delirium, or intractible medication side effects.
Bureaucracy and paperwork can be monstrous in themselves, even before you reach the patients. Physician, therapist, and nursing staff burnout thrive in such environments.
So I've been in awe of Dr. Ihaleakala Hew Len's experiences working at Hawaii State Hospital in the 1980's. Detailed accounts of these are in the book Zero Limits, which he and Dr. Joe Vitale co-authored. But the nutshell version is that while he was there -- doing only his Ho'oponopono cleaning, no conventional therapy -- all but 2 patients on a dangerous, high management forensic unit got well enough for discharge. No longer needed, the unit was closed, and the 2 onging patients transferred elsewhere.
How could this happen?
"When I showed up," offered Dr. Hew Len on a recorded conference call, "there were seclusion rooms all filled. Within a year or two, nobody was in the seclusion. And there wasn’t any goal to not have anybody there. It’s just that one takes the responsibility, and as you take responsibility you shift, and perceive the world differently. You see the world differently and you’re back to peace. The idea is to get back to zero, and zero is where Divinity resides."
Nobody questioned why Dr. Hew Len wasn't seeing patients for therapy. In fact many times I've heard him say that his most important activity was doing his cleaning before, during, and after trips to the hospital. He would read the charts, cleaning on his reactions to whatever he read. Murder? Rape? Any other kind of mayhem? Knowing we're all connected, he took 100% responsibility for this being in him. He petitioned Divinity to erase the data in him that presented as these patients' problems.
It sounds inconceivable. And yet, there are witnesses that it worked. Dr. Hew Len was there for several months before anyone asked what he was "doing", and why the ward was so much quieter when he was around. When he answered, some wanted to learn Ho'oponopono too.
Progressively, the violent, medicated, and shackled patients stopped fighting amongst themselves and attacking staff. Medication needs went down. Patients got interested in their own welfare, and started planning for work after discharge. Staff turnover decreased; the ward became an enjoyable place to work.
According to Dr. Hew Len, the key was realizing what any "problem" truly is: an old recycled memory replaying INSIDE, not outside us. It can be "erased" by our taking 100% responsibility for it, and saying "I love you"; this begins the process of repentance, forgiveness, and transmutation that is Ho'oponopono.
"The way you handle any problem is to:
#1 realize that the problem is in you, and
#2, to realize that the problem is simply a memory replaying.
It’s what the Buddah calls suffering, or what Jesus calls sin. You have in you the enormous ability . . . to erase suffering. And when you erase it in you, it erases everywhere. To me that’s the beauty, and the gift of Ho’oponopono. You take responsibility for whatever is going on in you, you let that go, it’s like letting the world go, letting the suffering go. It gets lifted from everybody."
Doctors, nurses, and therapists burn out, he says, when we don't realize this. When we see patients, we're taking on all the memories in their families, relatives, and ancestors too. Unless we clean in some way, we're headed for trouble -- and fighting the wrong "enemy". We're thrashing against problems through medications, commitment papers, restraints, and other methods, when the real problem is these memories in us that need to be released or "cleaned".
It blows the mind. I clean MY stuff, and YOU feel better? No Lexapro or Zyprexa required for either of us? hmmm . . . .
One caller shared a story that I'll remember always. She described a "nervous breakdown" and being hospitalized twice at Tripler Army Hospital in 2003. While there, she heard about Dr. Hew Len's work but didn't listen much to it.
She moved to Boston and was hospitalized again with severe depression. No medication seemed to work, and she was ready for "shock" therapy. But then she moved to San Diego in early 2008 . . . where she learned about Self-Identity through Ho'oponopono. She started cleaning.
Here my ears perked up further: her psychiatrist wanted to increase her medicines, which she called "high-powered addictive" ones. Despite her doctor's advice, this woman tapered them -- with no difficulty. And along with her Ho'oponopono practice, her depression faded away. No more medications needed.
How is this possible? I don't know, but I'm fascinated and very glad for her. She inspires me to learn as much as I can, and continue cleaning in my own life. This "zero", peaceful state is what we already are -- if we simply let go of the clouds that cover it. If we're patients, we may benefit, and insurance companies will rejoice. :-)
I also think my colleagues and I have much more to learn from Dr. Hew Len about burnout . . . and how we can avoid it. Care to join me for the November class in Woodland Hills CA? I'm looking forward to another in-person experience of my own then. Maybe see you there!
Posted by Pam Pappas MD at 8:11 PM