Ho'oponopono, Morrnah Simeona, and Our Lady of Freedom 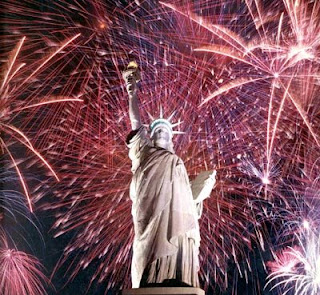 "Ho'oponopono is a profound gift which allows one to develop a working relationship with the Divinity within and learn to ask that in each moment, our errors in thought, word, deed or action be cleansed. The process is essentially about freedom, complete freedom from the past."
~Morrnah Nalamaku Simeona, Kahuna Lapa'au
I grew up knowing July 4th for its fireworks, parades, and red, white, and blue. Before learning United States history, I understood it mostly as my father's birthday -- which somehow the entire nation was celebrating too. He's often said he's honored that there's such fanfare on "his" day.
He and I would go to one of the fireworks stands in our town to buy collections of sparklers, whirlers, roman candles, and firecrackers, which we'd later light in the backyard. I'm sure the neighbors appreciated this. :-) The sulphur smoke smell still lingers in my memory, along with visions of exploding colored lights. I especially loved holding the sparklers, despite the hot fiery prickles on my arm.
But besides being certain people's birthdays, July 4th more widely commemorates the United States' adopting the Declaration of Independence from Great Britain in 1776. We have the Statue of Liberty holding her beacon high, like the photo above.
There are freedoms even more enduring than these political ones, such as the kind Morrnah Simeona (quoted above) spoke of with Self-Identity Through Ho'oponopono. Starting right where she was, she showed ALL of us how we can truly be free. She was very clear in defining the alternatives we can choose in any moment, along with their possible outcomes.
If we can appeal to Divinity within to forgive and transmute our erroneous memories, we can free ourselves of past assumptions, conditioning, and more. Imagine! Rather than being tied down by chains of past guilt, shame, anger, and other kinds of suffering, we can let these go and breathe freely.
Or, we can engage in them ad infinitum -- bogging ourselves down more and more in each moment. The choice is ours.
Designated a Living Treasure of Hawaii in 1983, Morrnah also felt very drawn to Thomas Crawford's statue of "Our Lady of Freedom" atop the dome of the United States Capitol. Over 145 years old, the bronze statue is a stately woman wearing an eagle-feathered headdress and flowing robes. She holds both a sword and wreath, symbols of strength and victory. Morrnah apparently connected with her while sitting on the Capitol lawn in the 1960's.
No wonder she did! "Our Lady of Freedom" represents the United States' memory bank, which was already packed and tangled even at that time. Morrnah dedicated her life to showing how ALL of us can be truly free -- through an ongoing process of cleansing our memory banks. She traveled the world with her teachings, and was often accompanied by Dr. Ihaleakala Hew Len.
In 1989, Morrnah helped author a bill to the Hawaiian House Committee in Intergovernmental Relations and International Affairs to recognize the statue as a symbol of world peace and freedom. Her organization, the Foundation of I (now known as IZI LLC), donated funds to restore the original plaster model of the statue, which had been disassembled into sections and stored at the Smithsonian for 25 years.
Our Lady of Freedom has now been refurbished and re-set both in bronze on the Capitol dome, and as her plaster cast in the Capitol Visitor Center (re-opened in December 2008). About her, the poet Rita Dove wrote:
" . . . don't think you can ever forget her
don't even try
she's not going to budge
no choice but to grant her space
crown her with sky
for she is one of the many
and she is each of us."
At every Ho'oponopono training seminar, a photograph of "Our Lady of Freedom" is present. As we clean, whatever comes off of us may come off of her too. Though the statue is here in the United States, Morrnah's vision of freedom and peace encompassed the entire world.
So Happy Independence Day to everyone -- not just in the United States. May all know true freedom, and the peace that passes understanding.
Peace begins with me,
Pam
Posted by Pam Pappas MD at 6:51 AM

You are a huge inspiration to me.

Keep up the great work.

I appreciate your own cleaning, and efforts to share about Ho'oponopono too.

Peace be with you,
Pam