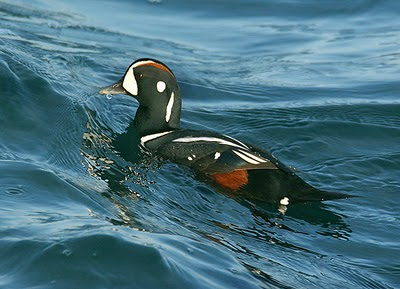 Creatures have volumes to teach us, if only we allow it. Inspiration seems to speak through them -- but not in words.
A dear colleague, Dr. Lucinda Sykes in Toronto, responded to my story about the roadrunner roosting serenely on my patio through last week's storms. Besides being an excellent physician, Dr. Sykes is also a long-time meditator and yoga practitioner. She's truly found her calling: she teaches patients to maintain calm awareness through Mindfulness-Based Stress Reduction. Doctors refer patients with all kinds of anxiety, pain, and suffering to her classes -- and they get good results.
She's also attended some Ho'oponopono trainings with me, and loves God's critters as much as I do. My roadrunner friend reminded her of something.
So she sent me this poem, which she'd received at a meditation retreat:
THE LITTLE DUCK
by Donald C. Babcock
Now we are ready to look at something pretty special.
It is a duck riding the ocean a hundred feet beyond the surf.
No, it isn’t a gull.
A gull always has a raucous touch about him.
This is some sort of duck, and he cuddles in the swells.
He isn’t cold, and he is thinking things over.
There is a great heaving in the Atlantic,
And he is a part of it.
He looks a little like a mandarin,
Or the Lord Buddha meditating under the Bo tree
But he has hardly enough above the eyes to be a philosopher.
He has poise, however, which is what philosophers must have.
He can rest while the Atlantic heaves, because he rests in the Atlantic.
Probably he doesn’t know how large the ocean is.
And neither do you.
But he realizes it.
And what does he do, I ask you. He sits down in it.
He reposes in the immediate as if it were infinity – which it is.
That is religion, and the duck has it.
He has made himself a part of the boundless,
by easing himself into it just where it touches him.
I like the little duck.
He doesn’t know much.
But he has religion.
I love both the little duck, and Dr. Sykes for sharing this poem about him.

Ho'oponopono allows us to "sit down" in the boundless, easing into it -- no matter how much it seems to swell and heave. We can "repose in the immediate as if it were infinity -- which it is." We don't have to know too much. Our little sloped heads are plenty for cleaning, and simply being one with what is.
Thank you, Dr. Sykes, and your little feathered Buddha too.
Peace begins with me,
Pam
Posted by Pam Pappas MD at 10:50 PM