Ho'oponopono: to Clean or Not to Clean? Or: Who Gets the Non-Stop Flight :-) 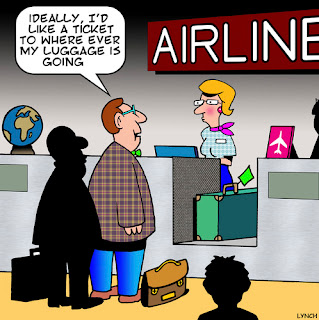 A fool and her luggage are soon parted. -- Pam Pappas MD

Ho'oponopono is a process which can be used in ALL of life, not just sometimes.  It can cleanse memories or data from us, which would otherwise show up as problems. The trick is to remember to DO IT. Even the most caring and genuine among us can sometimes forget.

Ordinarily, Ho'oponopono preparations before an airplane trip would include gently talking with your Inner Child (or Unihipili) about where you're going -- and making sure s/he is willing to come too. You'd cover all the legs of the journey, offering protection and care. You'd do your "HA" breathing, to make sure all parts of you are connected and energized before setting out; you might use a specific cleaning tool as inspired, multiple times before leaving. Think of how you'd prepare a small child for such a trip, and you've got it.

Usually I clean with each of the steps beforehand, from door to door -- and talk with the plane when I board. Sounds weird, I know; but I do. Planes are often grateful somebody notices what all they do. Sometimes for all of this, an abbreviated process is fine.

And here's what happens when you don't do ANY process, even connecting with your Inner Child. :-(

I'd been at a coaching workshop in Asheville, and was very tired. The event ended on Friday evening, and I had a long flight home to Phoenix -- non-stop (so I thought) from Charlotte.

Things began innocuously enough, and we even arrived in Charlotte early.  But then, we had to sit on the runway for about 20 minutes because traffic was backed up. First sign of "uh-oh." Then we ended up parking at a gate at the very end of the "E" terminal -- making it a LONG sprint to my next flight.

Coming inside, I checked the departure schedule for my next gate. There was only one flight to Phoenix listed -- showing a different flight number from the one on my ticket. Yet it was to leave within minutes of that flight.  Feeling uneasy, I wondered whether the recent US Airways merger with American Airlines had caused some change they hadn't told customers about? With no other option, I scurried over to Terminal B.

Arriving at Gate B12, I asked the agent for help. "You're the only flight to Phoenix this evening, but your flight number is different from my ticket. Can you please tell me if something has changed?" She looked puzzled, called her manager, and then told me the flight on my ticket was at Gate D6. Indeed it wasn't listed on the departure screen, but she assured me it existed and was boarding now.

Huh? A "secret" flight? And yikes! This meant streaking back across the airport -- where crowds created a nightmarish obstacle course. As I zipped and maneuvered through folks with rollerbags, I'm sure I was part of somebody else's nightmare too.

Breathlessly jogging to Gate D6, I found the boarding well underway. The flight number was correct, but the destination was Dallas-Ft. Worth! No mention of Phoenix at all. Handing my ticket to the gate agent, I asked her about this. With an exasperated tone of voice, she told me, "It goes straight through to Phoenix, ma'am."  The crowd shuffled along obediently, me with it.

Finding my seat, I promptly fell asleep. Still no cleaning, and no talking with the plane. Woke up realizing I was hungry, and asked if they were selling those chicken wrap sandwiches they advertised? "Oh no -- all we have is snacks, ma'am." None of them looked appealing.

(Um, another step in preparing for a trip is to bring your Inner Child a bag with all needed supplies for the day. Check.)

Arriving in Dallas, we taxied to the gate. The steward FINALLY mentioned that any passengers going on to Phoenix should get off the plane and re-board. So I did -- and was still hungry. It was 10pm in DFW's airport. What quarry might there be? Some corn chips in a vending machine. Yes, I confess to eating them. May my Unihipili forgive me.

Back on the plane an hour later, there were babies crying as if their little hearts would break. I finally said "Ice Blue" -- first sign of cleaning all night. Fell asleep again, exhausted.

Once in Phoenix, everyone migrated to the baggage carousel -- and waited, and waited, and waited. Finally it started up, letting out 3 bags . . . then stopped for about 20 minutes. Then started again . . . producing nothing. People paced, rumbling in low voices to each other. It was 12:45am, and even college co-eds looked bleary-eyed. After another 10-15 minutes, a baggage handler guy popped up from the chute, and started hauling bags up onto the carousel by hand. I could just imagine the work he had ahead of him, doing the whole flight's luggage that way.  I said to myself, "Ice blue."

From somewhere in the ceiling rang a voice: "Ladies and gentlemen, there's been a -- a baggage jam -- for Flight 894. We ask your patience while we get your luggage to the carousel." Then they announced a change to another carousel . . . which released a few more bags.  While this was happening, bags started appearing (unannounced) on the original carousel. Everybody shuffled back and forth to collect their belongings.

I waited until the last bag came . . . and mine was not there.  By now it was around 1:20am -- and those of us remaining had to search out the baggage office. Long line there, and only 1 agent at first. Then 2 more materialized.

My turn came, and I told the nice lady that my bag had a purple ribbon tied on the handle.  "Purple?" she repeated. "Purple," I said.

She disappeared into the bowels of baggage claim -- and came out with my bag!  "Where was it?" I asked. "Back in our office," she replied. "No -- I mean it wasn't on the carousel," I said. "Well, it got here before you did." "Before me?" "Yes -- they put it on the other flight from Charlotte and it arrived 2 hours ago."

This means my luggage got the non-stop trip to Phoenix, that I thought I had purchased when buying my ticket. The flight number it rode in on, left from the first gate in Charlotte that I'd tried (and failed) to fly out from.

So this, my friends, is what happens when you forget to do your cleaning. I'd started to feel irritable with the airline -- but suddenly, when my bag didn't show up, I realized the truth. I thought of Morrnah's leaving so many wonderful prayers and processes for us. I remembered Ihaleakala, Kamaile, Mabel, and everyone else who has ever taught me how to clean. What a night of, um -- accentuated learning!

My Inner Child and I went home, holding hands with our suitcase. I'd say it did a better job cleaning than me. :-)  And I'll do my job next time, for sure. 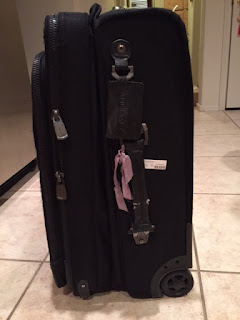 Peace begins with me,
Pam
Posted by Pam Pappas MD at 10:26 PM

Perhaps you had a Ceeport or some other Cleaning Tool in your suitcase?

I do travel a lot for business and always keep something in my luggage: it never gets lost or damaged while is not the same for me ;-)

I wonder if you could explain what to do in case the Unihipili doesn't want to travel by plane for instance.

Also, I recall one of my favorite post of yours, when you moved to the new office, and you described all the steps you took: would it be possible to describe how you'd clean "door-to-door"as you mentioned in this post?

That would be terrific!

Thank you so very much for your inspiring story: I've learn a lot form it.

Thank you for your comments. I do keep a Ceeport in my luggage. Also I just bought another keychain from ZeroWise.com to put on my suitcases. Call it extra-special care. :-)

I also personally wear the wrist embracers found there -- but my behavior was so "off" on that trip that stuff still went berserk. Of course, we'll never know how much worse it could have gotten without my wearing those embracers, do we?

If your Unihipili does not want to travel, s/he may well have good reasons that deserve listening to. Personally, I would be heeding and cleaning with this; the "how" would be different for each individual. One could clean 3 times with your tools, and then ask Divinity about it. Inspiration to use a particular tool or act in another way may come up.

If we build our personal relationships with our Unihipili over time, our communication becomes much more fluent, mutual, and reliable. If we're only communicating when we "want" something, this will likely not go well. No one enjoys feeling exploited, but likely we've been behaving this way towards our Unihipili for eons. It takes awhile for its revenge to die down in response to more trustworthy and loving behavior on our (Conscious Mind, Uhane) part.

With the door-to-door process, I consider each step in the journey and use my cleaning tools as inspired -- in advance. Things may come up to clean with at any point. It's all an opportunity to let go. Once we realize that having this stuff around us is part of our human inheritance, we can just deal with it rather than feeling overly bad about it. After I think I'm done, I can ask my Unihipili if there's anything else that needs attention, and something will often flash through. We do the best we can in each moment, and being ready for the unexpected. Sometimes when I'm cleaning while sitting on a plane, little babies love to watch. They get this wonderful, wide-eyed look on their little faces, and I'm convinced they see more of what's happening than I do. :-)

Best wishes in your journeys.

Peace begins with me,
Pam