Peace within the storm 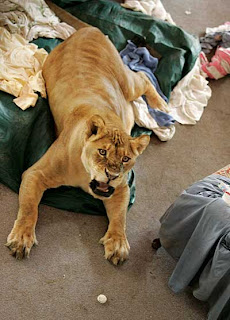 What would you do in a storm? Would you be willing to lay down with a lion?
Hurricane Ike recently slammed into Texas -- and stories of survival are surfacing from the flood. One in particular has amazed me: that of a lioness named Shackle and her owner taking shelter in church.
It seems Shackle lived in a zoo on Bolivar Peninsula, which was flattened by the hurricane. Michael Ray Kujawa was driving to safety with her, but saw stranded cars and trucks ahead. He knew they were in deep trouble.

Heading for the church, he was met by residents who helped the lion wade inside. Though water crept up to people's waists, and two-by-fours came floating through broken windows, Shackle stayed calm as a kitten. The people locked her in the sanctuary overnight, where she took reign on the altar.

And when morning came, everyone was still alive. They fed Shackle pork roast for breakfast . . . but when she roared, the National Guard stood at attention.
"They worked pretty well together, actually," Kujawa (her owner) remarked. "When you have to swim, the lion doesn't care about eating nobody."
A shrimper, Richard Jones, said he wasn't afraid of the beast -- and before that night, he hadn't set foot in a church in the 40 years he'd lived on the Bolivar Peninsula. He figured his survival was no divine intervention either.
"I drink beer and chase women, gamble, cuss," he said. "You can't call that religion. I'm either too good, the devil won't have me, or I'm so bad the good Lord won't take me. That's a good toss-up."
Perhaps peace can be wherever we find it, or can allow it to be within us. Here is a miracle on so many fronts: people caring for an animal who would have died in her cage without their help, her own calm during a horrendous and unfamiliar storm, and people living to tell the tale when whole houses were floating past. Being alive is a miracle in itself -- even down to the shrimper with his pithy world view.
What kept Shackle so calm during the night? How did she let people help her inside the church in a flood? Could she have been practicing ho'oponopono cleaning? I wonder. :-)
Posted by Pam Pappas MD at 6:46 AM

What a great story. I love people helping each other. Really shows the love.