The power of "I am sorry" 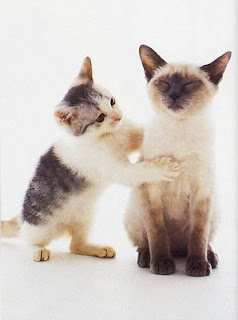 Certain words -- or lack of them -- can profoundly affect our lives. Three in particular, "I am sorry", are huge even though very short. They can make the difference between estrangement and healing in relationships.

And yet many people resist saying these words, which are part of the Ho'oponopono process. Some say they fear opening the door to undeserved guilt and recriminations, or resent the implication that they could have made an error. Maybe in the given circumstance they are "right", but there is always a cost. There are many other reasons these three words are difficult for many.
This week's issue of Newsweek magazine carries a wonderful "My Turn" story by Janice Wilberg, showing the results of "I am sorry" in her life.
The Power Of ‘I Am Sorry’
by Janice Wilberg
After years of silence between my parents and me, my father reached out with a few simple words.
When I was growing up, my family had its own way of dealing with disagreements. We stopped speaking. Sometimes the deep freeze lasted a day, sometimes a week. Every once in a while, an offending cousin or aunt was simply erased from the family landscape, airbrushed out of our lives like a deposed member of the Politburo.
I stopped talking to my parents after a series of family difficulties culminating in an angry phone conversation with my mother in 1988. This communication blockade continued to 2000. Other than an annual Christmas card from my parents, which they warmly signed using only their last name, there was no interaction whatever for 12 years.
People like me who were raised in a grudge-holding culture know that the silent treatment is self-perpetuating. The longer you are silent, the longer you will be silent. The further out into the ocean you sail, the harder it is to see the harbor. After a year or two or three, it's not so easy to pick up the phone and just chat.
And then my father sent me a card in which he wrote three very powerful words: "I'm so sorry."
We began to write letters. I told him about his grandchildren. He told me about his weekly golf and bowling outings. He also told me about my mother's Alzheimer's. Every letter matter-of-factly mentioned a new loss, always preceded by the phrase "Mom is about the same," as in "Mom is about the same but she can't cook anymore because she forgot how to use the stove."
The letters represented rapprochement but not reconciliation. That would have to happen in person. A year later it did. On the six-hour drive to their home, I asked my husband every 10 minutes what I should say to parents I hadn't seen in 12 years. "Say hello," he said. "Ask what's new."
This is pretty much what I did as we sat down to the supper of turkey loaf and instant mashed potatoes that my father put on the table almost the moment we walked in the door. Over supper, he briefed me on deaths, births and family estrangements. By dessert we were caught up. Over the next two years, I visited frequently.
Had I waited any longer to reconcile with my mother, she would not have known who I was, or cared that I had returned. As it was, I had a chance to apologize, to go on walks with her, to admire her purple velvet wedding dress from 1937 and to have many other turkey-loaf suppers. As her Alzheimer's progressed she became argumentative, then mute and, worse for my father, incontinent. He asked me not to visit during this time, and his terse letters chronicled more and more serious "Mom is about the same" news.
Months later, she died. I came as soon as my father called to help him with funeral plans. I sat with him as he typed out my mother's death notice on his ancient Royal typewriter. We picked out the clothes she would be buried in: a print shirt, slacks and the locket he'd given her when they were engaged 64 years before. We sat next to each other on folding chairs at the small-town cemetery and watched my mother's casket lowered into the ground.
Eighteen months later, my father died. During that time we had many more visits—nights out at the local Chinese restaurant with his grandchildren, hearing his stories about the Depression, about playing in jazz bands and running a five-and-dime store. We talked about my mother and his grief. He told me about taking an urn full of artificial flowers to the cemetery. He liked making my mother's grave prettier.
Every year I visit the cemetery where my parents are buried. I tend the hostas I planted to replace my father's artificial flowers and scatter thistle seeds to attract the finches they loved to watch. When I leave, I kiss the top of their headstone. I say goodbye and I feel happy. I feel part of my family.
The irony doesn't escape me. Here I am tending the grave site of parents whom I iced for 12 years. Oddly, I don't feel regret. I feel grateful. My father's three words saved me from being an orphan. Maybe there are other members of the grudge-holding culture who might listen to my story and make the move. It's not too late.

Newsweek -- 9/15/08, page 20
Thank you so much, Janice Wilberg. You have reminded me that 3 little words can initiate a process that completely transforms our lives.
Peace begins with me,
Pam
Posted by Pam Pappas MD at 5:21 AM

Good post. I am a CPA that helps families save money when making funeral arrangements. Too often I see families with regrets they will carry with them for the rest of their life -- simply because they didn't make amends at the end.

Right before my grandmother died I was sitting with her in the nursing home room. We had had a rough coexistence ever since my grandfather died. She felt that I had abandoned her to the nursing home. In a way, I guess I did. She was simply too ill for me to care for by myself.

I remember apologizing to her one Sunday night. She slapped my face and said she had forgiven me. Even though I didn't realize how much guilt I had been carrying with me, I felt "free" when she had done this. I could tell that she too, sensed a "peace".

Hi
Wow, that is a powerful stopry. I know completely where she is coming from. My family is the same way, they are right into disowning people, and using the silent treatment. Actually with the power of ho'oponopono I am hoping to erase all these memories that cause these problems.
Thank you for this article. It really hit home the power of ho'oponopono.

Peace begins with me
T
http://www.hooponoponoworks.blogspot.com