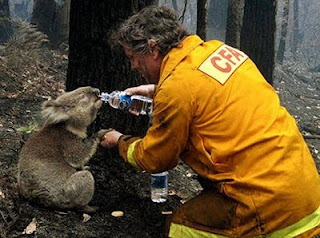 The deadliest wildfires in Australia's history have destroyed many acres, homes, and lives this week.

In the midst of such horror, Divine Inspiration comes through in the above photo of a tired, parched koala being offered a drink by volunteer fireman David Tree. Taken by another volunteer with a cell phone camera, the photo captures a moment of uncomplicated Love in action.

The koala was walking on scorched paws in a charred forest near Melbourne. Seeing that she was in trouble, the fireman pulled over his truck. The koala "plonked herself down, as if to say, 'I'm beat', " recounted Tree. He offered her a drink from a water bottle -- and "the most amazing part was when she grabbed my hand. I will never forget that."

Now nicknamed "Sam", she is recuperating at Southern Ash Wildlife Shelter in Victoria state. Although badly burned, she is healing well -- and even has a protective new boyfriend named "Bob". Burned also, he apparently puts his arm around her for tender loving care. The two share the same cage at the shelter.

Living high in eucalyptus trees, koalas usually escape wildfires by climbing higher out of reach of the flames. But these fires were so intense that whole trees were bursting into flames at once.

Along with at least 180 humans, millions of animals have perished. Relief workers are scrambling to save the ones they can.

Tree and his colleagues were doing backburning work when they found "Sam". Visiting her later at the animal shelter, he got teary-eyed on seeing his little friend again. Though looking fuzzy and "cute", koalas are known to growl and have sharp claws. So this encounter in the wild was quite unusual . . . but this was a very unusual time. "Who knows if she recognized me or not, but I would like to think so," said Tree.

Fires are still burning near Healesville, north of Melbourne. I can't help but wonder about the name of the place, where healing is so needed right now.

Little Sam in the photo teaches us about the spirit of Life, and David Tree does exactly what he is called to do. He could have kept on driving, but he didn't. To me, that's Inspiration. Thank you Divinity, David Tree, and "Sam".

Peace Begins with Me,
Pam

Thank you for your kind words, Jeannie.