Walking on the Clouds with Ho'oponopono 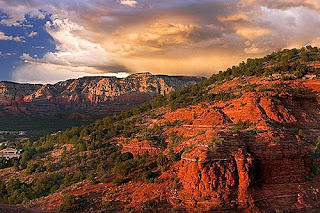 Living in a land full of sunshine, I have long appreciated clouds. Blue skies are certainly beautiful too . . . but I've noticed that it's actually the clouds which make light dance in the sky.

Would that we could appreciate our seeming problems so easily, saying "Thank you!" when they appear. After all, now they're up for healing.

On this week's Thursday night call, Mabel Katz read an excerpt from the book, Prison to Praise by Merlin Carothers. It concerned the author's vision of a bright, sunshiney day, with a raft of black clouds just above. A ladder pushed upward through these clouds, and people were trying to climb up because they'd heard that above the clouds was something more beautiful than any had ever seen. They would climb and climb, get lost and disoriented in the dark clouds, and then slide back down the ladder into the crowd below.

Finally the author's turn to climb arrives. He climbs the ladder into the clouds where the darkness becomes so intense it nearly forces him back down. But step by step he continues . . . and suddenly, "my eyes beheld the most intense brightness I had ever seen. It was a glorious whiteness too brilliant to describe in words."

He then finds that he can walk on top of the clouds easily. But as soon as he looks down to examine the nature of the clouds he's walking on, he begins to sink. "Only by looking at the brightness could I stay on the top."

The more intense light above all this is shining continuously, and represents the heavenly kingdom. It can be reached only by focusing on it rather than the clouds (the "problems"). In the author's vision, God tells him that no matter how difficult it is to trust him to look after his life, to "keep clinging to the ladder of praise and move upward."

This is a little like the Law of Attraction, and also like Ho'oponopono. Focusing on the "problem" (the clouds) brings more of what we don't want -- more pain, drama, upset, etc. It engages us in all that. Doing the Ho'oponopono process, using whatever tools seem appropriate, keeps us focused on the cleaning rather than getting lost in memories -- which is all these problems are anyway.

Dr. Ihaleakala Hew Len was a surprise guest this evening, and was kind enough to answer questions. So I asked him about the family situation I've been stewing over these past few months. Might there be something in particular I can do to clean in me about this?

"What I get," he said thoughtfully, "is that you should enlist the help of your inner child. I mean talk to it, and say, 'Here's what's up, here's what we're experiencing -- and we know it's just information, memories replaying. If we can clean it up, our father will find, and our mother will find whatever place they need to be. But we have to clean it up! We have to look inside of ourselves and work on those memories that we are experiencing as them. And if we let those memories go, the solution will come."

"Let me give you an example," Dr. Hew Len added. Then he described someone concerned about their mother, who lived with other relatives whose house was being foreclosed on . . . and had nowhere else to go. With the cleaning, the mother suddenly got an invitation to come stay with a wealthy cousin in her native country for a couple of months -- a solution no one had thought of. Continuing with the cleaning, the woman was then invited to live permanently with still another cousin in Hawaii.

"Who'd have thought of those things?!" Dr. Hew Len started laughing (and I did too). "We're so stuck in the data and we're not cleaning, so the Divinity can't respond to us!"

He continued, "The idea is, if we don't get to the cleaning, it's like the short stories of Chekhov -- it's a stage, and it's a replay! So while you're telling me about your father and stepmother, I am cleaning what's going on in me that you're telling me about them . . . because I don't want this memory to replay in me. So you have to be willing, your sister has to be willing, SOMEBODY has to be willing to shut the memories down that replay on the stage of life."

"So I would enlist that subconscious. Ask it, 'Help me with this. I know I've been holding on, but please . . . ' You can teach it about the cleaning. Tell it 'I love you'. If you program that subconscious, it will do the cleaning non-stop while you're sleeping. But you've got to ask it! It's in you . . . . and you've got to shut it down in you!! If you do that, you cannot believe how the world will change. Your father will find the right place, and your stepmother will. I have just seen these things happen if I am willing to clean. If I don't clean, wooooh! They play over and over and over again."

We had still another laugh over often being at this "woooooh!" stage with many issues, maybe forming a "woooooh" club for those of us with more pervasive stuff to clean. :-)

Through this conversation, I felt lighter, laughing about things I couldn't laugh about only a few minutes earlier. It felt like walking on the clouds in Mabel's reading, rather than sinking down in the muck.

Clouds can be scary if we're afraid of storms . . . or they can be the backdrop for some amazing light shows. For me now, they're also symbols of "what's up" for cleaning, and reminders to say "Thank you!" for the opportunity.

Peace Begins with Me,
Pam

I was on that wonderful call with Mabel too. (FYI, I found my way to your blog via Jimmy's.) We are all cleaning our way home, and even though it's all inside, I appreciate company on this homeward journey. :-)

Thank you for your blog... and for you!

Peace of I,
Jeannie

Thank you for your kind words, Jeannie. Glad you are enjoying Mabel's calls too.

Peace of I to you,
Pam

The words you shared below has made an impact on me. Instead of focusing on an annoying issue, (I am the one that emailed you recently- have a hearing problem) I have been cleaning and cleaning, and I feel significant shift, and I am so grateful!

"Focusing on the "problem" (the clouds) brings more of what we don't want -- more pain, drama, upset, etc. It engages us in all that. Doing the Ho'oponopono process, using whatever tools seem appropriate, keeps us focused on the cleaning rather than getting lost in memories -- which is all these problems are anyway."

Thank you for being a source of inspiration-. I am also writing my own thoughts in my new B blog and it feel good. :)

I am sorry, please forgive me, I love you, thank you.

1this morning I was feeling desperate about a gun range club which I learned last night is now being built in our quiet little East Texas community where deer have always had freedom to run and have babies and to eat our flowers!!I was asking the Universe to help me connect online with others who have dealt with these oppressive energies and been successful at stopping them. Then I thought about ho'oponopono and googled that. Your blog came up and wow! I loved the idea of a 'wooh club'. I consider myself a member already. I had already been cleaning on whatever it is in me that created this situation, but I was HEAVY. After reading your blog, I feel light as a feather. This is the childlike place that I associate with 'breakthroughs' in my life....where I appeal to the Divine and clean on myself and accept how Divine Life shows up in the situation. I am looking now for creative surprises rather than experiencing dread of what was described last night as "inevitable". Thank you so much for the blog. BTW the gun range developer is from Arizona...I think it is interesting that you are also. The dark cloud from Arizona dispelled by the bright light from Arizona! Thanks again!